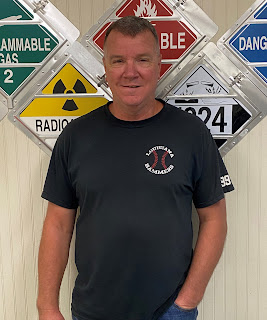 Mr. Gore is originally from Greer, SC. He went into the Marine Corp and was a correctional officer (specialist). He worked in the brig (aka jail). He did that for 8 years. He has been stationed at Parris Island, Camp LeJeune, and Okinawa

After the Marine Corp, Mr. Gore then went to Greenville Technical College for Aircraft Maintenance. He has worked at Lockheed Martin and General Electric. Mr. Gore went to work for Northrop Grumman and got back into aircraft maintenance in LA. He eventually made his way back up to the Upstate and currently resides in Greer, SC. Mr. Gore likes to fish for fun and also enjoys cooking.

Mr. Gore got interested in trucking because he likes to be outside and “likes having the opportunity to make more money which you can do in trucking”. Mr. Gore was exploring a few trucking companies and decided to go with a flatbed company.

Mr. Gore, since this spotlight, has obtained his CDL! He just finished his classroom training and is out with his driver trainer as we speak. We wish him the best of luck in his endeavors.

Posted by SBLTruckDrivingAcademy at 10:24 AM