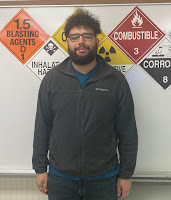 Mr. Dunlap is originally from Savannah, GA. He lived there for 13 years and then moved to the Upstate. He worked in a warehouse and has been working in that field since he graduated from high school. He was interested in truck driving from being around the trucking industry while working in various warehouses. “I decided to pursue getting my CDL so I could live a more comfortable life (financially).” Explained Mr. Dunlap.

“When I came to orientation at SBL Driving Academy, I liked that the school had manual transmissions, and a family environment. Everyone treated me like family from the time I walked in the door”. Mr. Dunlap also expressed that he really likes the instructors, “they show me respect”.  Mr. Braziel, Lead Instructor at SBL DA, stated “he {Mr. Dunlap} is an awesome young man. He is very polite and a lot of fun to be around. He represents himself in a very professional manner”. Director Bailey stated that, “He {Mr. Dunlap} is a family man and is trying to do something to better his family. Since he has been here, his wife and child visited the school so they could have a picnic lunch with him. He is progressing nicely and seems to be enjoying himself. He is always early for class and willing to learn. “

Mr. Dunlap is married and has 3 children; he likes to travel and loves to try different foods.  Sometimes you can catch him skateboarding on his lunch break. Mr. Dunlap is very interested in driving tankers and hopes to go to work for Superior Carriers after completing his program.

Posted by SBLTruckDrivingAcademy at 8:47 AM