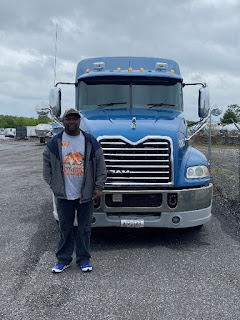 Mr. Carter is originally from Teachey, NC. Mr. Carter moved to South Carolina in 2006. He has worked in concrete his entire life, “since about 11 years old”. His uncle had his own concrete business followed by his cousin. Mr. Carter had his own crew that worked on job; he has done everything from residential to commercial concrete jobs. Mr. Carter wanted to drive trucks when he was younger, but at the time, he was making more money laying concrete. Eventually, he went to truck driving school at Trans Tech in Fletcher, NC.

After graduating, he obtained CDL, got hazmat and tanker endorsement along with his Twic card. After a few years and with the shift in driver pay, Mr. Carter decided he wanted to get into trucking, so he signed up for a refresher course. Eventually he wants to purchase his own truck. As he is currently talking to a few carriers, he is thinking about going to Superior Carriers. Mr. Carter is married and has 7 kids. He has 5 boys and 2 girls from the ages of 18-28. Mr. Carter likes fishing and he loves college football on Saturday and NFL.

Mr. Carter has worked with all the staff as he has cycled through various aspects of his refresher course. Mr. Braziel, lead instructor, shared that “He {Mr. Carter} is a pleasure to be around. Mr. Carter has done a great job and nailed every skill he has been asked to execute.” Director Bailey stated, “He {Mr. Carter} is very polite and respectful. He is very knowledgeable. He is one of those people have been caught up with things shutting down with COVID19, so he is trying to reimagine himself. I am glad we were still open in order to help him. It has been a pleasure to be around him. He has learned a lot here and expressed that several times.” Davison, Compliance manger, added that “Mr. Carter is always early and very self-motivated”.

We wish Mr. Carter the best of luck in his career as he finishes up his refresher course today!

Posted by SBLTruckDrivingAcademy at 1:19 PM