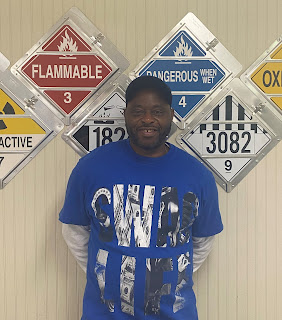 Kenneth Griffin is originally from Philadelphia, Pennsylvania. He moved down to the south when he was young.  “Love at first sight” was how he described truck driving. “It was the first time I made good money.” Mr. Griffin drove mostly dry box and hauled manufacturing items, along with tires for Michelin.

He started to encounter some health issues, which lead to dialysis. He was devastated because he had to stop driving a truck for almost 10 years. He diligently tried to stay in the trucking industry, but due to his medical condition, no one wanted to hire him. He went on disability while he waited for 9 years and 10 months on the transplant list. After his transplant and recovery, he decided that he wanted a change, so he went through the Vocational Rehabilitation program. Mr. Griffin decided that he wanted to get back into the job force, so he obtained a job at Furman University as a cook.

That didn’t seem to be exactly what he wanted to do, so he decided to go through a helpful program called SC Works to try to get back into what he loved: trucking. That brings us to today. Mr. Griffin is in his first week of class and his favorite part has “been being back, I know I’m on a journey to getting back to what I want to do. It is difficult to live off one paycheck and a set amount of money”.

SBL Truck Driving Academy would like to wish Mr. Griffin the best of luck in his program. He is truly an inspiration and a great example of what you can achieve when you set out to change your life. Mr. Griffin decided that his journey wasn’t going to end on disability and being a transplant recipient, he decided his story would have a second path that would lead him back to where he wanted to be, in the trucking industry.

Posted by SBLTruckDrivingAcademy at 7:23 AM